I hope that everyone has had an amazing week! If you read last weeks post then you probably already know a little bit about what this post is going to be about. For those of you that haven’t read it (which you really should!) this post is a review of an amazing concert I went to a little over a week ago. Not only did I see one of my favorite bands to see live, but I also got to see 3 other amazing bands! I also got to go see the new Masquerade in Atlanta!

After finishing my last two exams of the semester my mom, sister, and I drove off to Underground Atlanta to see State Champs at the Masquerade! I hadn’t been to the new location yet so I was excited to see what it was like. The first thing I noticed, and loved was that there was a parking deck so there was actually a place to park. It was also nice that the parking deck was so close to the venue. The venue itself was really nice, and all the people working there seemed to be really friendly as well. The only thing I really have to say that was bad for the overall experience was the sound at times. I don’t know if it was the venue or a mixture of things, but sometimes it was hard to hear what the people were saying/singing.

First up for the night was a band from Bedford, England called Don Broco. They had a really fun show that got the crowd going. It was a great way to start the night! I didn’t know all of their songs very well, but I had listened enough to be able to sing along with ‘Money, Power, Fame.” After the show some of the band members headed out to the merch table to hang out, and meet fans! We got to meet Rob, and get a picture with him. He was a really nice guy, and it was awesome to get a chance to tell him that we really enjoyed their show.  I really wish I had listened to their songs more before going to see them so I could’ve known more of their stuff.  Their show made me want to listen to them more as soon as I got home though. If you want to check them out, then click on the link below for their video for “Money, Power, Fame.”

The second set of the night was With Confidence, a band from Sydney, Australia. I knew more from this band because my sister had introduced me to them a few months before. They’re one of her favorites so we both had a lot of fun jamming to their set. It was cool to me that before the show even started my sister had gone to get a shirt, and the drummer, Josh Brozzesi, was out helping at the merch table. He was really nice, and talked to us, signed my sisters notebook, and took a picture with both of us. He was also out after the show meeting people. I love seeing band members do stuff like that, and it made me love With Con even more. I definitely left more impressed with this band, and if you haven’t heard of them then check out their video for “Voldemort” below.

The last of the opening bands was a band from New York called Against the Current. They’re another band that I knew a few songs from, but wish I had known a little more from them. They were really cool, and had a lot of energy while on stage. I really like what I heard from them, and enjoyed Chrissy coming out to sing during State Champs set as well. Also they were another band that had people come out after the show to meet fans. I didn’t get a chance to meet them due to some of us having an early morning alarm the next day, but I thought it was cool that they did that. “Wasteland” is one of my favorite songs I’ve heard from them so check out the link so you can jam to it as well.

Last of the night was the band I came for which is a band from New York called State Champs. It was my third time seeing them in concert, and they were amazing as usual. They have so much energy on stage, and you can just watch and see that they put a lot in to what they do. Also I can’t write this paragraph, and not say something about how awesome the crowd was during this set. Between the crowd and the band the concert was one of my favorites I’ve been to! While I’ve been a fan of State Champs for a little while I left this show loving them even more. I honestly don’t think I can rave enough about how amazing this band is. Also they did my favorite song at the show! There isn’t a video, but if you want to check out their stuff then you should check out “Simple Existence.” If you don’t know them then I highly recommend you check them out! If you’d like to hear a song from them then check out “All You Are Is History” below.

State Champ’s tour is almost at an end so catching a date may be a little late now, but if you ever get a chance to see any of these bands I highly recommend it! If you’re going to a date I hope you have an amazing time or if you went to a date I hope you enjoyed it as much as I did! Can’t wait so see them all again one day! Next up on my concert list is Jenny and Tyler at Eddie’s Attic! Can’t wait for that show, and to tell ya’ll about it! Also last week I was talking about how amazing the music industry is right now! I picked up the Harry Styles and Paramore albums today, and I highly recommend them both! Hope you all have an amazing week! Have you seen any of these band? Do you have any concerts coming up? What new albums are you jamming? I’d love to hear from you! Comment on my post or connect with me on social media!

Here’s some pictures from the show (sorry they’re all a little bit blurry): 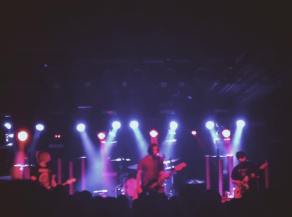 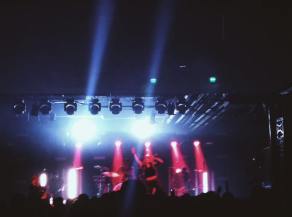 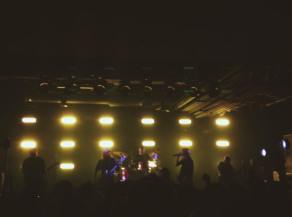 One thought on “State Champs”